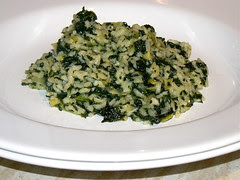 Bring broth and water to a boil with 3/4 teaspoon sea salt in a 3- to 4-quart saucepan. Meanwhile, cut stems and center ribs from kale and discard.

Stir kale into broth in batches and simmer (all of kale), stirring occasionally, until tender, 5 to 10 minutes. Transfer kale with tongs to a large sieve set over a bowl and gently press on greens to extract more liquid. Add liquid in bowl to simmering broth and keep at a bare simmer, covered. Chop kale.

Stir in kale, cheese, and remaining tablespoon butter and cook, stirring, until heated through and butter is incorporated, about 1 minute. Season risotto with sea salt and pepper and, if desired, thin with some of remaining broth.
It was a fine risotto - we used this recipe (from the web - Gourmet magazine - Sept, 2002) and modified it by adding 1 sliced leek, after the onion had softened,  Later on we pureéd a portion of the kale after softening it and adding it to the risotto after it had softened a bit. That was a good idea as it prevented the risotto from becoming overwhelmed by the leafy kale and added colour to the dish, in general. The chopped kale and the rice were both 'al dente'. It was oh-so-very flavourful - and the flavours balanced very well. We had it with a salad of lettuce, radiccho and red onion.

I just made this, with the addition of the leek and minced kale as described at the end. Absolutely delicious and I will make it again!