A Provençal Daube
Originally uploaded by Lisa Fagg.
For the penultimate meal of 2007 Steve prepared this exquisite dish of beef and vegetables with Provençal herbs and seasonings. The original recipe comes from Hugh Fearnley-Whittenstall's 'Meat' cookbook and was altered slightly at the suggestion of a good friend who has retired to the South of France.

The recipe, in its adapted form, can be found here. The result was one of the best beef stews I have ever tasted! Chapeau, Steve!
Posted by Cooking Fool at 5:10 pm 1 comment: 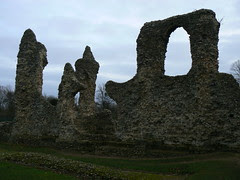 Yesterday, Steve and I visited Bury St. Edmunds in Suffolk, E central England - about 45 minutes from Cambridge by train. It was a dreary day but we enjoyed the afternoon shopping and visiting the ruins of the old Abbey of the cathedral of St Edmunds Bury.

The town has a rich (and long!) history: In 903 the remains of King Edmund were interred here in a monastery, founded c.630, which later became a famous shrine and Benedictine abbey founded by Canute. In 1214, English barons struggling against King John took an oath in the abbey to compel him to accept their demands. The result was the Magna Carta (1215). Among the buildings of historical interest in the town are a Norman gate, ruins of St. James Cathedral, and a 15th-century church. Moyses Hall, a Norman residence, has been made into a museum.

We spent a while walking among the ruins and, I, marvelling at how such an historical structure could simply be part of the town, in a park amongst swings and slides and other playthings. The ruins were extensive, too, and we could have spent a lot more time there were in not for a noxious-smelling stench coming from what looked like smoke nearby. If a smell can be "spooky", this one was - it was acrid and unidentifiable. Most mysterious was the fact that although Steve and I were made very uncomfortable by it, others at the site didn't seem to notice it. Hmmmm...

Posted by Cooking Fool at 7:52 pm No comments: 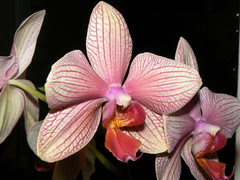 Posted by Cooking Fool at 7:37 pm No comments: 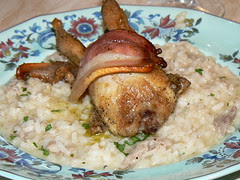 Mmmmmm! Boxing day. We went for a long walk in the Fens and finished up with a pint at the Blue Lion. As soon as we got home we started this... The recipe is from my new cook book, Francesco's Kitchen by Francesco da Mosto, a Christmas present from Steve. Very simple, very elegant, and very delicious.  It was lovely.

Tomorrow, duck with a prune and chestnut stuffing - and a day trip to Bury-St-Edmunds... And, maybe, rye bread! More later...
xx

Posted by Cooking Fool at 10:49 pm No comments: 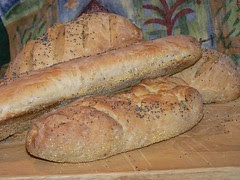 Today I baked bread (it was 'baking day'...) to have with Christmas dinner. It looked so attractive I had to photograph it before we tucked in! Finally, I've solved my problem with bread - I simply don't like to eat bread that's more than a day or two old (there are exceptions to that, of course!) and so now, rather than having to figure out how to get to a store with a decent bakery, I make my own. This bread here, for instance will probably last us a couple of days - some will be had tonight with our snails and garlic butter starter. Tomorrow's breakfast and lunch will account for the rest (unless we are more restrained than usual...)
Hope you had a happy Christmas!

Posted by Cooking Fool at 6:25 pm No comments:

Steve bought an octopus from the Cambridge Market fishmonger on Friday. I have cooked this beast before but wasn't really happy with the results. This time I decided to try something based on a delicious dish I once had at the Eraina Taverna on Free School Lane, off Bene't Street in Cambridge. As is my custom, I looked in several cook books and Googled around until I found what I thought would be the perfect recipe. Using a combination of two main recipes, one for the tenderising technique and the other for the actual ingredients, I was able to produce a very tasty dish very close to my memory of the dish I had in the taverna. We had it with white rice and broccoli although it might have benefitted from a big bowl of Greek salad which would have been more in keeping with its cultural and culinary aspirations!

Posted by Cooking Fool at 10:11 pm No comments: