Last Sunday we went cycling in what is arguably the 'hilliest' part of Cambridge - the Gog Magogs. We'd been there just the weekend before and I had spotted (on my rest break at the midpoint of one of the climbs!) some blackberry bushes lining the side of the road. Fantasic, I thought, just the thing - we can pick some and make jam! The only problem was we had nothing to collect the berries in. So we noted the spot and resolved to come back the following week. So we did. It was great fun too. We managed to pick a fair amount of berries between the two of us and got them home without too much bruising.

A shortage of jam sugar meant I had to put the berries in the freezer until we got some more! Anyway, today was the day. My first jam of the season is sitting on the counter cooling in jars. It's very dark and thick and I think it will be great in yoghurt and on toast. I'll be trying some tomorrow for breakfast!

We spent some time in the garden, tidying up a bit after several heavy rainfalls and not much gardening done. Entertaining and cycling don't leave much time for gardening - weekends need to be longer! While we were in the garden, our trusty bread machine was churning out some more pizza dough. Pizza is getting to be a regular item on our menu!

Once the dough is done you can either knead it a little, roll it out and use it immediately or you can knock it back and let it rise a couple of times for a more 'bready' crust.
Posted by Cooking Fool at 4:48 pm No comments: 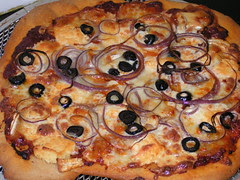 Goat's Cheese & Red onion
Photo by Lisa Fagg.
This Saturday we invited Xavier, a post doc in the lab I work in at Cambridge, over for pizza and a movie. I proposed that we would make the pizza if he would bring a movie. Not just any movie, mind you, but Brice de Nice, an insanely funny French movie starring Jean Dujardin, about a meglomaniacal 'surfer dude' who spends his idle life waiting for his Big Wave. [For those of you who don't know Nice, there's a snowflake's chance in hell of finding a wave, big or small, on the beach in Nice!]. The idea was not entirely my own - Xavier knew that I wanted to see the movie (he'd just recently bought the DVD) and thought it would be fun to watch it together sooooo....

Panic - it'd been a long time since I'd made pizza! Quick! I needed a recipe for dough and for sauce! I flicked through my bread machine book and decided to do the simplest thing. In fact, we decided to make the dough the night before and the sauce on the day. That's what we did. We ended up making two batches of dough because I made a mistake and made one with full whole meal flour (instead of 'wholesome' wheat flour!) and I was not too sure how well that would turn out. Steve was good enough to get up in the wee hours of the morning and make some white dough.

The sauce was a simple one of tomato passata (tomato sauce, U.S.), oregano, thyme, salt, pepper, crushed garlic and chopped onion, simmered gently for about 1.5 hours and then left to cool. I prepared and assembled the ingredients for the toppings. We decided on three - goat's cheese and sliced red onion, chorizo and mozzerella and feta cheese and black olives. This is our 'trinity' of comfort pizzas; the ones we know and like the best.

By the time Xavier arrived everything was ready - dough, toppings and ice-cold Leffe and Carlsberg Export beer. Xavier offered to help assemble the pies so, with all hands on deck we stood around the kitchen, talking about food, drinking beer and making pizza. Steve whipped up a nice salad dressing and I washed some leaves (and threw in some baby leaves that I've been growing in a huge styrofoam tray out in the back garden). Minutes after that, the cooked pizzas were cut and ferried out to the dining table.

Everything was good, although I thought the crusts were a little too hard for my liking. I made a mental note to try another pizza dough recipe next time. [As it turns out, I got to try a new recipe just two days later when our friend Chiara from Naples came over for pizza chez Faggs!] Steve chose a nice Chianti from our favourite 'cellar' (the Cooperative Supermarket!) which went down very well indeed.

Part 2 of the evening was the showing of Brice de Nice. Thankfully, the film was sub-titled so Steve and I were able to understand all but the most subtle jokes. Neither Steve nor I can remember laughing so hard in a long time. Really good film.
Posted by Cooking Fool at 11:28 pm No comments: 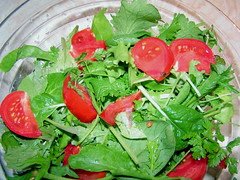 Garden Salad
Photo by Lisa Fagg.
It turned out to be a lovely day today, after all! We were expecting rain and clouds and such and were pleasantly surprised by sunny (but very windy!) weather. We've spent the day on our computers and watching the Tour of Britain on TV. We were hoping to see a snippet of the Tour of Spain on Eurosport but they dropped it out of their schedule - without explanation! Grrrrr!

Hah! It's about 6 hours after I wrote that first paragraph! All of a sudden, I had to go cycling! So I cashed in my raincheck to go cycling with Steve (he asked me earlier in the day and I just didn't feel all that motivated...) and we went out for a very energetic, fast 18 mile ride around. We rode out to Fulbourne then on to Shelford, via the Gog Magogs (!), down to Trumpington and then home via Cherry Hinton. It was just great! Last week's strenuous ride up and around Stortford seems to have been good for me - I'm not as afraid of *pain* as I used to be!

After a rest and a refreshing shower, we set to preparing dinner. It was a doozy - we had a lovely sea bass, roasted in foil with fresh herbs from the garden and lemon juice drizzled with extra virgin olive oil with Chinese water spinach stir-fried in olive oil with loadsa garlic. To round things off, we had a tossed salad of salad greens we grew in the garden and our own home-grown tomatoes!

Just what we needed after a stop and go day. I really feel ready to start the week tomorrow (although I'm pretty sure I'll be out of steam by Wednesday!)...
Posted by Cooking Fool at 5:16 pm No comments: