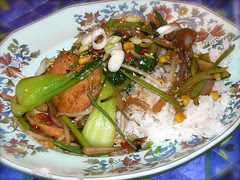 Teriyaki Chicken Stir Fry
Originally uploaded by Lisa Fagg
Ah, Saturday! After a very lazy morning, we spent the day food shopping on Mill Road at Cho Mee, Seoul Plaza and Al Amin for things like Chinese vegetables & soy sauce, kimchee, tofu and laver and meat for a barbecue on Sunday (weather permitting!) After several (many!) games of "Ticket to Ride - Europe" (more on that later) we turned our hands to dinner.
As usual, I asked Steve to make the sauce and, this time, it was Teriyaki sauce. He did a beautiful job of this while I scrounged around in the fridge for stray vegetables to put in the stir fry. What a wonderful way of using up those odds and ends that skulk around in the far reaches of the fridge! In this case I found 1 large Pak Choi (which I ended up using only half of), a red chilli, some mange tout (snow peas) and a handful of Green Giant canned corn. This all went in the wok, along with the chicken strips (which had, by the time I'd gathered everything, been marinating in the Teriyaki sauce and sliced chilli for some time...), a large handful of bean sprouts and slices of red onion. I couldn't resist throwing in a handful of fresh, washed baby spinach at the very end. In the end. In the end, the dish we produced was wonderful but resembled the original Wagamama recipe very little!
I cooked quite a bit of extra rice so that I could make fried rice the following day. More to come, I guess!
Posted by Cooking Fool at 10:11 pm No comments: Suzuki Amiyaki Soba-2
Originally uploaded by Lisa Fagg
Another Saturday night... We shopped on Mill Road - which is becoming a routine thing in our household. First we went to Cho Mee and, Lo!, they had fresh fish! Fantastic. Immediately our minds began to whir. What can we do with a fish? Who cares? Buy the fish - we'll figure it out later... so we did. We also bought a bunch of different Chinese vegetables (Kow Choi, sprouting broccoli) and soba and somen noodles.
Next, we went to Al Amin, the Mediterranean shop, and bought some meat from the Halal butcher there. We got a chicken, a couple of lamb neck steaks, some lamb kidneys and a half dozen Mergaz sausages. There was a mixed grill barbecue in our future... Our last stop was the Korean shop, Seoul Plaza to replenish our supply of Ramen noodles, imported Korean mushrooms, Korean pancake mix, Kimchee and seaweed laver. Nice.
We decided, after a flick through the Wagamama cookbook, to make Suzuki Amniyaki Soba. We started cooking before realising that we'd have to make a teriyaki sauce before we could make the Yaki Soba sauce. No matter. My personal 'saussier' Steve, attended to that duty with his usual finesse.
So, sauce made, it only remained to quickly fry the fish, briefly cook the noodles, sauté the vegetables and, voilá! Dinner, at last!

Bon appetit!
Posted by Cooking Fool at 9:57 pm No comments: 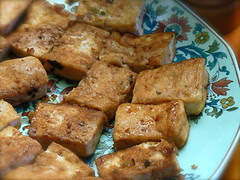 Korean Seasoned Tofu
Originally uploaded by Lisa Fagg
Wow! A new cuisine (for me)! Saturday evening we had Clemente and his wife Myunghee over to our house for a Korean meal. Increasingly these days we've been inviting people over to dinner to cook with us. Myunghee and Clemente were really keen to cook a Korean meal for us - and we were more than happy to comply! We arranged to meet them at the Korean Supermarket, Seoul Plaza in Mill Road, to shop for the meal. While choosing the various ingredients that we would need for the meal Myunghee introduced us to many of the exotic foods that I'd only wondered at in previous visits to the shop. 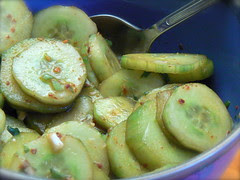 Korean Cucumber Kimchee
Originally uploaded by Lisa Fagg
Koreans seem to find uses for more parts of the plants they use for cooking than usual - they eat the stems, leaves, bark and fruit, in many cases. As it happens, Clemente and Myunghee are vegetarians so we had, I think, an opportunity to have a few more dishes on our table than would be the case were we having a 'meat-centric' meal. 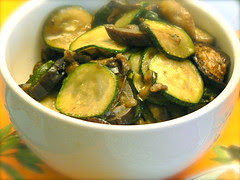 Korean Bibimbab - Zucchini and Aubergine
Originally uploaded by Lisa Fagg
We cooked more dishes than I thought we'd be able to do justice to - stirred rice (with aubergine, zucchini, beansprouts and sweet potato stem) and seaweed laver, Korean cabbage kimche, kimchee seasoned pancakes, cucumber kimchee and seasoned tofu. It was all so deliciously different and fresh-tasting.
I hope to post some of Myunghee's recipes in the near future - with her permission, of course!
Happy cooking!
Posted by Cooking Fool at 11:38 pm No comments: