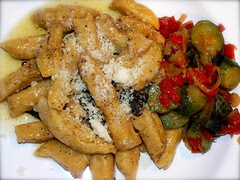 Butternut Squash Gnocchi with Sage Butter 3
Originally uploaded by Lisa Fagg
Our weekly organic vegetable box is really stretching my culinary skills these days. I'm finding that, more and more often, I have to resort to recipes to be able to use these vegetables in interesting and unusual ways. This week (and the week before!) we got a butternut squash. My only experience with this vegetable is in pies - as a substitute for pumpin (and delicious, too!) - and in creamy soups. Today, I went for something completely different. I was in the mood for something like pumpkin ravioli - but wasn't in the mood to go through the complicated motions of making home-made pasta - and filling it. So I trawled the web until I found this recipe for Butternut Squash Gnocchi with Sage Butter on the Abel & Cole website:

Cut the squash and potato into small cubes and steam gently over simmering water until tender.

Once cooked, mash together in a clean pan and place over a low heat for a few seconds to 'dry out'. Transfer to a bowl and allow to cool.

Once cool, work in the egg yolk, flour, 1/2tsp salt and pepper slowly. Mix together to form a sticky dough.

Spoon the gnocchi mixture into a piping bag (like the one you might use for icing) and fit it with a large plain nozzle.

Bring a large pan of water to the boil. When the water reaches a rolling boil, cook the gnocchi in batches.

Pipe about 12 bits of the mixture into the water, cutting them from the end of the nozzle with a sharp knife. Once the water returns to the boil simmer for around 1-1/2 minutes until the gnocchi start to soften around the edges. Remove and then cook the next batch in the same fashion.

Next melt some butter in a frying pan, add the sage leaves and fry gently until the butter turns golden.

Immediately add the gnocchi and stir over a low heat for around 30 seconds making sure all the gnocchi is covered in the sage mixture. Serve immediately on bowls and sprinkle generously with Parmesan shavings.


Okay. So there were problems - (1) No piping bag and (2) a pre-conceived notion that gnocchi are usually of the consistency of a soft dough which you can roll into a snake-like shape and cut into pieces for cooking.

Sceptically, perhaps, I followed the recipe as it was written. What I was left with was a mixture that would be perfect for either icing a cake or piping into a pot of boiling hot water - neither of which I planned to do. So I looked into other gnocchi recipes and began the process of adding more and more flour (and a second egg yolk) until I'd achieved the consistency I wanted. I also added about 1/4 tsp of grated nutmeg to the mix to bring out the flavour of the squash.

The upshot of the story is I can't tell you how much additional flour went into this recipe. I'd guess something like another 2-3 cups (I didn't weigh it). I achieved a light, soft dough that I could just barely roll out gently into a snake shape. I cut the pieces out with a knife, adding flour to the top of the 'snake' to help keep the knife from sticking.

We worked in batches, adding 12 - 15 pieces of the dough to a large pot of salted, boiling water at a time. When the gnocchi floated to the top, they were allowed another minute to cook before being scooped out with a slotted spoon. They were put in a dish and sprinkled with olive oil to prevent them from sticking together. This went on for a while as we had a lot of dough!

Finally, once it was all cooked, we melted the butter in a frying pan, added the sage leaves and made the sauce. Two to 3 portions of gnocchi were added to the butter, once it had browned, and stirred around to coat them with butter. Salt and pepper were added and then the gnocchi were served out onto pasta plates and liberally sprinkled with grated parmesan cheese.

It was very good. If I find a better recipe, I'll post it.