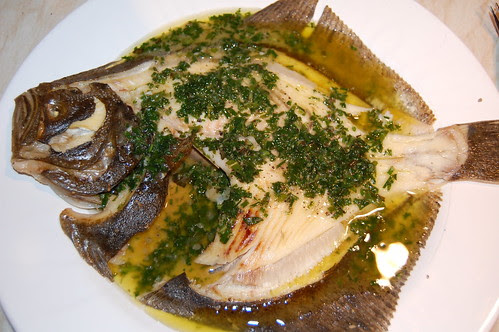 Poached Turbot with herb butter, originally uploaded by Lisa Fagg.
What a weekend! We had beautiful weather - sunny skies and warm air - and I'd had the foresight *smirk* to buy some fish for our weekend meals. Actually, I went to the fish monger stall meaning to get only one or two fish dinners - but I ended up accounting for every dinner this weekend! I got a squid (a rather sizeable specimen, in fact) a bunch of very fresh and delicious sardines (which we ate that very Friday evening) and... a turbot!!! We'd only ever bought turbot, at the most, twice - be we adore the fish. I find it difficult to get a fish that's really suitable for 2 people. This time, though, whilst I was (very vocally) admiring the (huge) turbot (pl.) on display, my eyes were directed to the smaller, more manageable-sized turbot. Well... the scallops I'd selected went back into the display (the fishmonger was very gracious in putting them back in the case!) and the turbot was weighed, priced and put in my bag. Off I went - without any idea of what I was going to do with it.

Ah... Rick Stein is my hero! I knew I'd find something, within the pages of one of the several books of his that I own, that would do this fish some justice. And so I did. His recipe for "Poached Turbot with Herb Butter" was, unusually, not accompanied by a photo, but we went ahead with it as it really sounded good!

The recipe itself is pretty straight forward. The ingredients are too - you just need a turbot, some butter, herbs (I used parsley, bay, thyme and chives) and salt and pepper. The rest was preparation: The oven was pre-heated to 230 ˚C. The turbot skin was lightly scored around the base of the dorsal and ventral fins - evidence of that can be seen in the photo - this made skinning the cooked fish a LOT easier. Next, the fish was placed in a baking tin and 600 mls of water was added. After a 20 minute poach in a 230˚C oven, the fish was removed from the cooking water and the top, darker skin was carefully removed. The cooking water was reduced to 2 tablespoons and added to the melted butter and herb mixture. The final 'flourish' was to pour the hot butter and herb mixture over the fish, in a serving platter. Finally, sprinkle any remaining chopped parsley over everything, for effect.

At the table, remove the flesh from the bones - carefully with a spatula. First lift the flesh recently revealed by removing the dark skin away from the bone yo a plate, then remove the spine and serve the lower portion of the flesh.

We served this lovely fish with organic new potatoes and a lovely, fresh and juicy"rainbow" tomato salad.