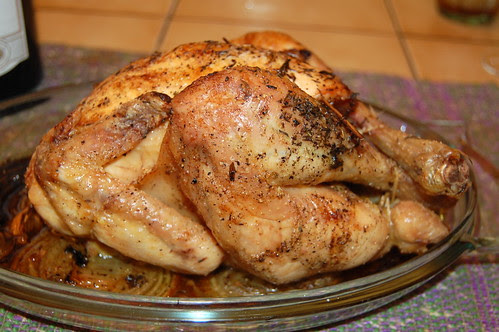 Our first full day in Nice was very domestic - we went shopping in the local supermarket and cooked and ate at home.

On our first shop this visit at the local Monoprix, I was very impressed with the Meat and Poultry section - the meat was very fresh-looking (and included veal, fresh brains and pig trotters among its many delights) and the poultry didn't look anything like what I've become accustomed to living here in Britain: besides the usual chickens (which were all 'corn fed') there were chickens from several different farms. While I didn't spot any 'poussin', (the British equivalent of the 1-2 person Rock Cornish game hen we have in the States), there was something called a "coquette" which was just a little bit larger and perfect for 2 - 3 people.

Duck (both mature and duckling) appeared in several forms in the poultry cabinet - there were, in addition to whole duck and duck breast, duck drumsticks and duck wings (the latter, presumably, used to make stock). I was in heaven!

I can't overstate the freshness and delights of the "wet fish" counter - everything 'delivered daily'... or the deli counter with its salami, saucisson and fois gras... or the meat counter - a groaning board of veal, fresh farmed rabbit, pig tails and things I'd never even seen before (but wouldn't shy away from trying to cook).

To sum up this particular evening: we bought a regular, farmed chicken, some (really good, La Molisana) pasta, and some screamingly fresh-looking lettuce and tomatoes for a salad.

Once home we decided to prepare the chicken simply with salt, pepper, butter and herbs de Provence. We ended our meal with a fresh salad, simply dressed, with home-made vinaigrette...