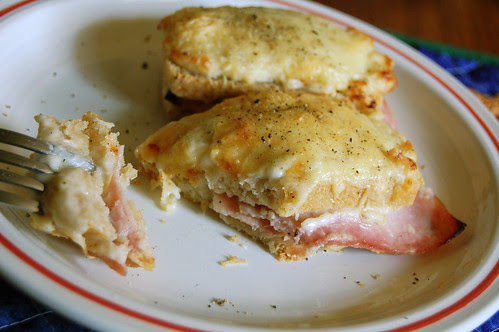 Here's a recipe I got from Richard Bertinet's book,"Bread"- it can be made with any type of sliced bread. Traditionally, it's made using pain de mies which is as close as the French get to "sliced bread", as we know it:

Prepare a recipe of béchamel sauce (Steve used 25 gms butter, 25 gms flour and 15o ml milk) then, season it with salt and pepper and allow it to cool. While it is cooling, preheat the oven to 200˚C. When the sauce is cool (and it will be quite thick and not saucy at all!), slice the bread and spread some béchamel on one side. Sandwich 1 or 2 slices of ham between two slices of bread, béchamel facing the ham, then thickly spread béchamel sauce on the top of the sandwich. (We added a little smear of Dijon mustard to the ham a nice touch, I think...)

Continue until you have either used up all the béchamel sauce or have run out of bread slices! Sprinkle the sandwiches generously with grated cheese (Gruyère is recommended but having none we used a 50/50 mix of cheddar and emmental) and bake for 12 - 15 minutes, until browned on top.